In this day and age of cyber espionage, encryption of information is becoming increasingly more important. But even in the early Middle Ages, scribes developed techniques to encode their messages, as this blog post reveals.

At the very end of an eleventh-century manuscript copy of St Augustine’s Confessions, an Anglo-Saxon scribe wrote “Fknktp Lkbrp χρp prfcpnkB rfddp”. Rather than garbled gobbledegook, these words were written in a simple but popular code: the vowels have been replaced by their neighbouring consonants in the alphabet: a=b; e=f; i=k; o=p; x=u. The scribe’s words actually read: “Finito libero Christo [the Greek letters χρ is a well-known abbreviation for Christ] preconio reddo”, which is Latin for something along the lines of: “The book is finished, I give a laudation to Christ in return”. Apparently, this scribe was happy that his job was done and rendered thanks to Christ in an encoded message.

The same motivation seems to underlie another encrypted colophon at the end of an eleventh-century Gospel-book made in England: “DFPGRBTKBS AMΗN”:

The first two words of this colophon read “DEO GRATIAS” [thanks be to God]; the last word is “AMEN”, with a Greek capital Eta instead of the E (and a weird M and N, which I haven’t been able to identify).

One of the most ambitious encoded messages of this kind is found in Ælfwine’s Prayerbook, made in the 1020s in Winchester. The encoded message reads as follows:

The first line is easy to decipher: “Frater humillimus et monachus Ælsinus me scripsit, sit illi longa salus” [Ælsige, the most humble brother and monk, wrote me, may a long health be to him]. The code “B m .. n” means “Amen”, the “e” is replaced by two dots (for which, see below).

The next two lines take some more effort. The first part of the third lines reads: “Ælfwino monacho aeque decano compotum istum possideo” [I posses the computus for Ælfwine, the monk and dean]. The second line (vel us, vel us, vel us), makes clear that the words “Ælfwino monacho aeque decano” can also be read as “Ælfwinus monachus aeque decanus”, thus changing the dative forms into the nominative forms. Combined with the last part of the third line which starts with “vel”, this reads: “vel Ælfwinus monachus aeque decanus me possidet. Bfmn.” [or Ælfwine, the monk and dean, possesses me. Amen].

The rather intricate code is simply an inscription to indicate the maker of the manuscript (Ælfsige) and its owner (Ælfwine). Given the rather complicated encoding, one might wonder whether Ælfsige’s modesty (he calls himself humillimus ‘most humble’) is feigned modesty.

And yet I especially, corruptible through the womanly frail foolishness of my sex, not supported by any prerogative of wisdom or exalted by the energy of great strength, but impelled spontaneously by the ardour of my will, as a little ignorant creature culling a few thoughts from the sagacity of the heart, from the many leafy, fruit-bearing trees laden with a variety of flowers, it pleases me to pluck, assemble and display some few, gathered – with whatever feeble art, at least from the lowest branches-for you to hold in memory. (trans. Dronke 1984)

Hygeburg’s declaration of ignorance is undermined by the flowery rhetoric of her Latin prose, which suggests a high level of education. The encoded message with which she closes her message has a similar, subversive effect:

In this message, Hygeburg has replaced all the vowels with abbreviations for ordinal numbers, e.g., “Secd” for “secundum” [second] meaning the vowel e. The code can cracked as follows: 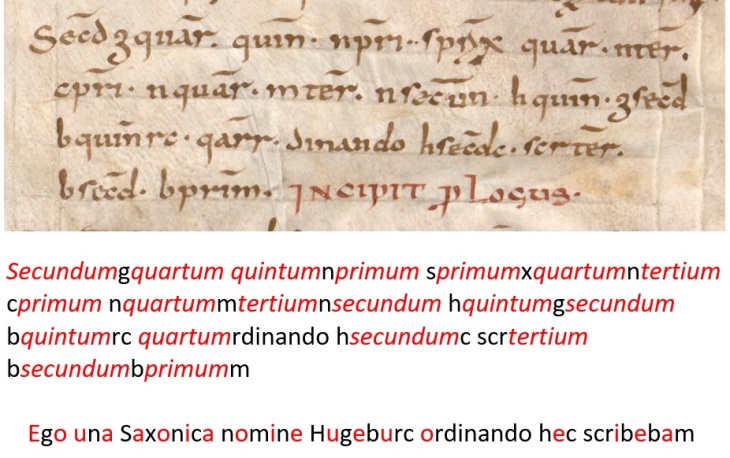 With her encoded message, Hygeburg not only shows off her encryption skills, she also claims the text (and possibly the manuscript?) to be her own: “Ego una Saxonica nomine Hugeburc ordinando hec scribebam” [I, a Saxon nun named Hygeburg, have written this].

Another encryption method, similar to Hygeburg’s, is the replacement of vowels by dots. One dot equals the first vowel (a), two dots equal the second vowel (e), three dots mean the third vowel (i), and so on. A line in a tenth-century manuscript of Aldhelm’s De Virginitate, probably made in Canterbury, is reproduced above and reads: “V⋮V:V·L:F:L⋮C⁞MCR⋮ST:: ·M:N” (four dots in a line representing U; four dots in a square representing O). In other words: “Vive vale feli cum Cristo. Amen” – here, the word “feli” [with/for the cat]  is usually emended to “felix” [happy], so that it translates to “Live, be well, happy with Christ. Amen.” (Live, be well, for the cat, with Christ would make little sense, especially given the rather haphazard relationships between cats and medieval manuscripts, for which see: Paws, Pee and Pests: Cats among Medieval Manuscripts).

My last example is found in a tenth- or eleventh-century manuscript of Bede’s Vita Sancti Cuthberti, made in southern England. Here, the scribe has once more replaced the vowels with dots: ·=a – :=e – ⋮=i – ::=o – :·:=u.

Which, rather charmingly, translates to “May he who wrote live and may he who may read be happy”. This encrypted message suggests that encoding messages was an enjoyable pastime for scribes and that decoding these messages was considered a fun mental exercise for readers.

If you have enjoyed this blog post, why not follow this blog (see button on the right-hand side) and/or read the following posts:

By thijsporck in Manuscripts on May 15, 2017.
← Spoiling the Mystery: Grendel in Beowulf Movies Old English memes →