A great portion of the extant Old English corpus survives between the lines of Latin manuscripts, as interlinear glosses. Generally, these glosses provide a simple word-for-word Old English translation of the Latin text in order to aid the reader, but various alternative glossing methods existed.  This blog post takes a look at what could be read between the lines in early medieval English manuscripts.

Save me, Lord: A simple word-for-word gloss in The Vespasian Psalter 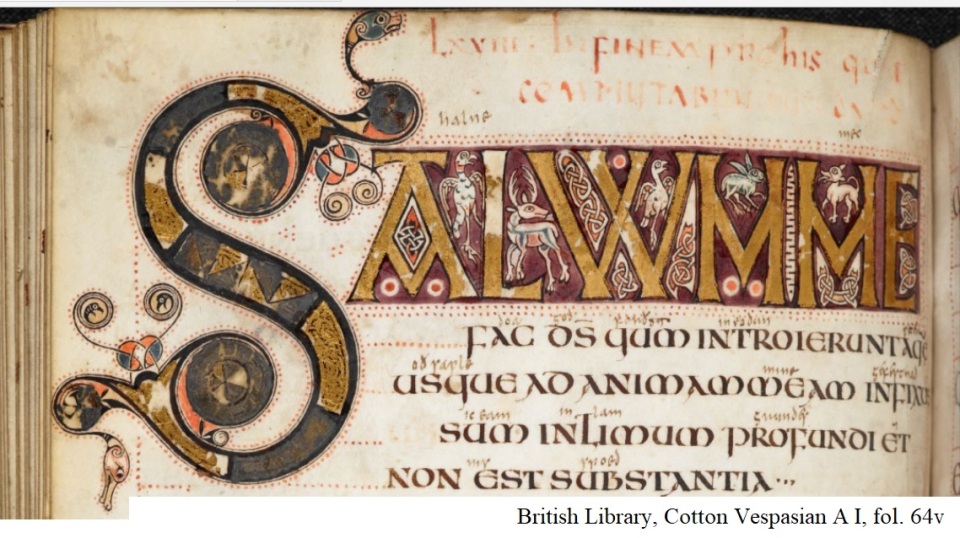 This beautiful page from the eighth-century Vespasian Psalter shows the opening lines of Psalm 68. A careful look at the words SALVUM ME reveals a great number of animals hiding out among these letters (animals often feature in such illustrated capitals; for another example see my blog on A medieval manuscript ransomed from Vikings: The Stockholm Codex Aureus ). More interesting, linguistically speaking, are the little words written above the Latin: Old English glosses, that provide a word for word translation of these lines:

Save me, God: because the waters have come in unto my soul; I am fastened in the ground’s mud and there is no substance.

Here, the Old English glosses clearly follow the word order of the Latin and, thus, “animam meam” is glossed with “sawle mine” [soul mine], whereas “mine sawle” [my soul] would be a more natural word order in Old English. This type of gloss is the most typical kind of gloss found in early medieval English manuscripts.

When one word is not enough: Multiple glosses in The Lindisfarne Gospels

Created around the year 700, the Lindisfarne Gospels is possibly the most famous Anglo-Saxon manuscript. While it is known for its beautiful illumination, the Lindisfarne Gospels also contains a word-for-word gloss, added some 250 years after the original manuscript had been produced. The maker of this tenth-century gloss, a monk named Aldred, was not always satisfied with offering just one Old English translation for each Latin word. His work features several ‘multiple glosses’; that is, several Old English alternatives are offered for one Latin word. The example above shows Aldred’s four glosses for Latin desponsata ‘married’: biwoedded, beboden, befeastnad and betaht. As such, Aldred’s gloss may function as something of a thesaurus of Old English.

Some glossators also included some syntactical guidance, since Latin word order was markedly different from Old English word order. A good example of such syntactical guidance are the so-called ‘paving letters’ in the Old English gloss to this eleventh-century copy of the Benedictine Rule. Here, the word-for-word Old English translations above the Latin are preceded by a letter – these letters show the Old English word order. Rather than “deað dæghwamlice ætforan eagan gewenedne habban” [death daily before eyes with expectation to have], this should be read as “habban deað dæghwamlice gewenedne ætforan eagan” [to have death daily, with expectation, before your eyes] which, incidentally, is one of the forty-five “tools of good works” that Benedictine monks had to abide by. 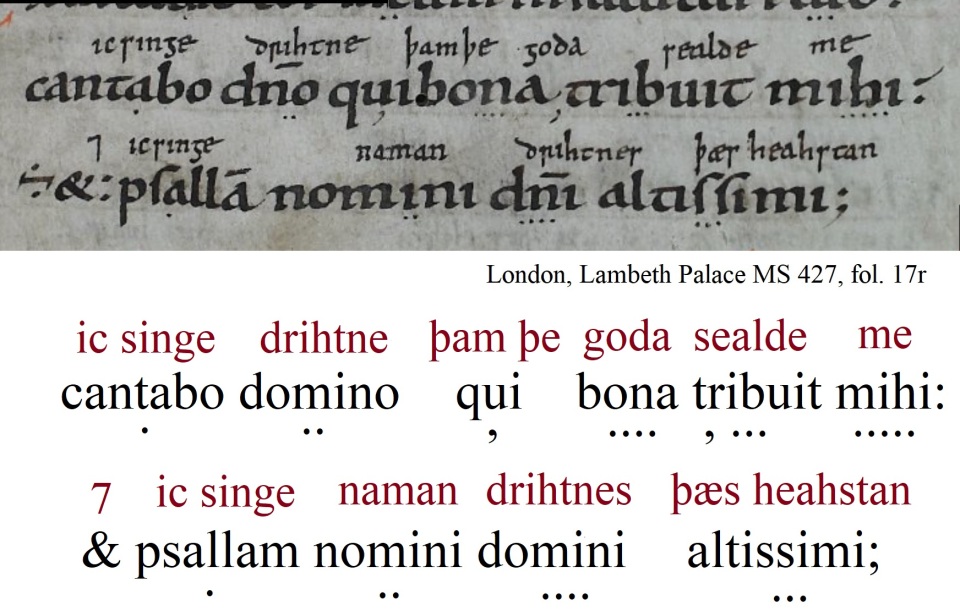 The scribe responsible for the glosses to the tenth-/eleventh-century Lambeth Psalter had a different system for indicating word order and syntactical relationships. A system of dots and commas underneath the Latin words provide the reader with extra information. The commas under “qui” and “tribuit”, for instance, show that the relative pronoun “qui” is the subject of the verb “tribuit”: ‘who gives’. The dots underneath the Latin words show the Old English word order: rather than “ic singe drihtne þam þe goda sealde me 7 ic singe naman drihtnes þæs heahstan”, we should read “ic singe drihtne þam þe sealde goda me 7 ic singe naman þæs heahstan drihtnes” [I sing for the Lord who gave goods to me and I sing the name of the highest Lord], if we put the dotted words in numerical order.

This eleventh-century manuscript of Aldhelm’s prose De virginitate shows yet another type of gloss: the so-called “scratched gloss”. These glosses were made without ink and, thus, were scratched into the parchment. As a result, these glosses are only visible from a particular angle (or, thanks to digital image editing, if you play around with contrast and brightness). In early medieval England, a user of this manuscript may have tilted the manuscript over in order to reveal the gloss. If he had done so for this manuscript, he would have seen that the Old English translation for Latin scribendi is “writende” [writing].

If you liked this blog post about manuscripts, you may also enjoy the following posts: